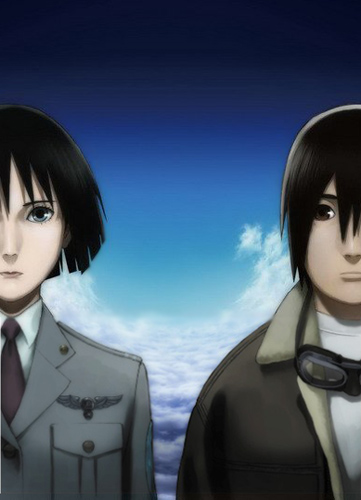 Plot Summary: After experiencing several major wars, people have finally obtained peace. However, they are unable to appreciate peace without contemplating war and death from a safe distance. Therefore, they make a show business out of war. In this staged war, those who must fight each other are children called "Killdre". They remain forever young until they die in the sky.Kannami Yuichi is stationed at Uris, a frontline base in Europe. He has no memories of the past prior to arriving there, but he knows he is a Killdre, and knows how to operate a fighter.Yuichi's ability is soon acknowledged and he becomes an ace pilot. Then, he meets a girl, Kusanagi Suito, a commander of the base, who is also a Killdre and used to be an ace pilot as well. Although they are meeting for the first time, they feel as if they had known each other for a long time and soon they become close. However, one day, she asks him a surprising thing: "Can you kill me? Otherwise, we cannot escape from all this."