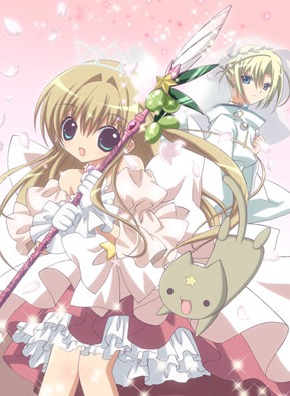 Plot Summary: Kamichama Karin is about a 7th grader named Hanazono Karin. Her parents and beloved cat, Shi-chan recently died, she's getting horrible grades and is forced to live with her aunt. One day, Karin meets a young, orphaned, 7th grade boy named Kujyou Kazune, and discovers that her mother's ring has the power to transform her into a goddess. She soon moves in with Kazune and his cousin Himeka. She and Kazune, who has godlike powers of his own, have to fight to protect Karin's ring and Himeka from the evil intentions of Karasuma Kirio (whom Karin calls Mr. Glasses Man), who is also divine. The trio embark on crazy adventures and go on trips along the way. They also meet new friends and people, such as Micchi, who may know a lot of information not only about the divine transformation of the gods and goddesses, but also about Kazune-kun's long lost father...