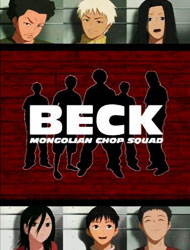 Plot Summary: Tanaka Yukio, better known by his nickname Koyuki is a 14 year old who feels disconnected from life in general. Through the act of saving a mismatched dog, he meets guitarist Minami Ryuusuke, and becomes involved in Ryuusuke's new band BECK. Koyuki's life starts to change as the band struggles towards fame.